Book Review: A Muslim’s Mind: What Every Christian Needs to Know about the Islamic Traditions

A Muslim’s Mind: What Every Christian Needs to Know about the Islamic Traditions by Edward J. Hoskins 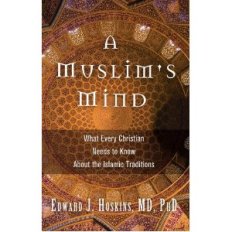 The subtitle of this book is surprisingly accurate! Every Christian who wants to understand Muslims from the inside should read this book. Dr. Ed Hoskins suggests that relying only upon the Qur’an to understand Muslims is like playing cards with only half a deck. In this succinct, easy-to-read book (which is based on years of study of the Traditions), he shows us how much we have been missing without the other half of the deck.

Hoskins’ goal is to give serious Christians tools to use in building rapport with Muslims. “My desire is that after reading this book, you will understand Muslims better and see how easy it is to speak truth to them, starting with their own words and ideas” (p. 22). He points out how much the Islamic Traditions (the Hadith, for example) influence and shape the thinking of Muslims, most of whom desire to perfectly follow them in every aspect of their lives.

However, Hoskins does not present topics Muslims would most value. Instead, he deals with seven topics that Christians would be most intrigued by, even though only three percent of all Hadiths deal with such topics. Hoskins gives the Hadith’s perspective on topics such as Mohammed, women, Jews, Jesus and Christians, shariah law, and jihad. He also shows how valuable the Hadith are in building bridges to Muslims that naturally lead to conversations about deep truth.

Hoskins writes with a deep compassion and empathy for Muslims that is contagious. He appeals to Christians to understand Muslims better so as to have more compassion and love for them. He treats potentially inflammatory topics with grace and humility, desiring not to offend Muslims by being too explicit when discussing Hadiths that embarrass many moderate Muslims.

My only real concern about the book is that Hoskins so much wants to avoid painting too dark a picture of Islam that he does not always seem to present a balanced picture of the significant harshness and violence that permeate the Hadith. That said, he does show that the violence of radical Islam is largely based upon the Hadiths and on Muslims’ sincere attempts to imitate the life and teachings of Mohammed as taught in the Traditions. He demonstrates that radical Muslims have not “hijacked” Islam, but rather, Islamists have been radicalized by seriously using the Qur’an and the Hadith as their guide for thought and action.

Although thorough scholarship stands behind this concise analysis, Hoskins writes simply and directly and shows clearly the profound influence the Traditions have on the ordinary Muslim mind. This is a book I will use and recommend widely.

EMQ, Vol. 48, No. 2, pp. 242-244. Copyright © 2012 Evangelism and Missions Information Service (EMIS). All rights reserved. Not to be reproduced or copied in any form without written permission from EMIS.

Lead Church Planter at Redeemer Church of Silicon Valley and Director of West Coast Mobilization for ABWE International.
View all posts by Scott Dunford →
This entry was posted in Uncategorized. Bookmark the permalink.